Why are there so many shooting incidents and other gun crimes on Walmart property?

Shootings at Walmart stores have increased for at least the third year in a row.

Here at the Walmart Shootings blog, I have dutifully chronicled every media report of gun crimes committed at Walmart properties.  In 2014, there were at least 92 shooting incidents, leaving 16 people dead and 42 injured.  This is up from 2013, where there were 83 shootings, leaving 24 killed and 42 injured -- an increase of over 10%.  In 2012, there were "only" 53 shootings.

There are entire countries that have fewer shootings than just Walmart stores in America!

Of course, these represent only those shooting incidents which were reported to the police, then reported by the media in a way that it was caught by Google Alerts or to friends who alerted me.  Likely there were some that slipped through. 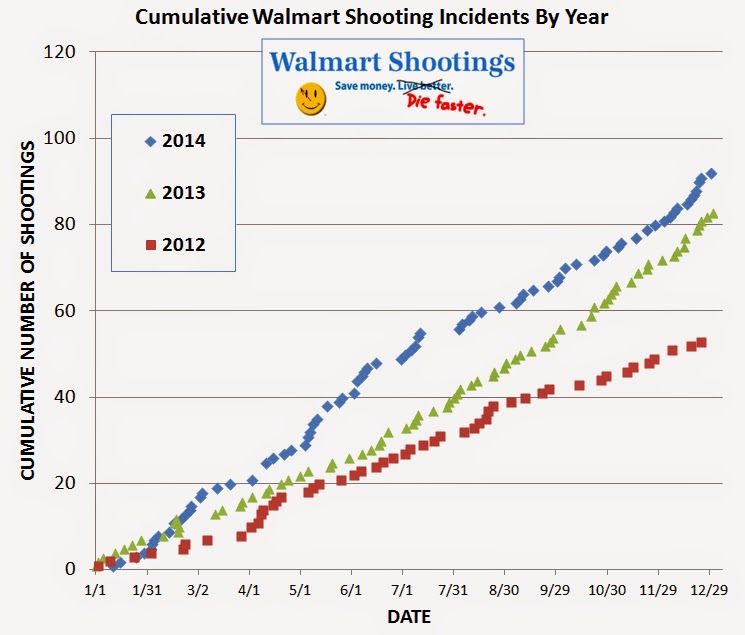 See the graph, to the right, which shows the shooting reports in a cumulative fashion over the course of all three years.

But there were also plenty of gun crimes where shots weren't fired.  There were 78 armed robberies and shopliftings by gunmen at Walmart properties.  Gunmen threatened shoppers and employees with guns, carjacked shoppers, and had accidents with their guns.

Walmart continues to allow customers to carry concealed or openly-displayed guns in their stores.  Does this make customers and employees safer?  Not at all.  In 2014, people with conceal carry permits caused 11 incidents, including many shootings of themselves and others, including the most recent case of a very pro-gun mother who allowed her two year old to get into her special gun-purse and fire the unsecured weapon, killing the mother in front of the toddler and three of her other children.

There were four cases ruled as self-defense at Walmart stores.  But before the gun guys jump on these as evidence of making us "safer," consider that one of these cases was during an illegal drug sale. Another was by a man who got into an argument and shot the unarmed victim as he walked to the car, fearing that the other man was going for a gun.  He got off by using Florida's "Stand Your Ground" law, which only requires a person to claim they were afraid.  In a third case, the victim was also unarmed, and the two men had gotten into a fight, and the shooter had continued the confrontation prior to shooting the other man.  Only one case involved a man who was simply minding his own business and shot at an armed robber, after the robber was fleeing.

Where are Walmart's priorities?  Is it gun sales?  Or is it the protection of their shoppers and employees?  Clearly, they aren't interested in the safety of those who are in their stores!

Walmart bans all sorts of things in their stores that they deem "dangerous," including pregnant Barbie dolls, CDs with unwanted lyrics, and various books.  They stopped allowing paring knives in their bakeries after a single incident.  This Christmas, they even kicked out some high schoolers who were caroling in the store!  But Walmart has no problem continuing to sell guns, including five different models of assault rifles, and allowing people to carry guns through their stores.

Perhaps thinking about all of this, one sensitive Walmart employee refused to process a wedding photo for a couple posing with their shotgun.  Oh, never mind....  A Walmart spokesman quickly told media that the employee had been "misinformed."

With so many shootings and other gun crimes at their stores, it's not surprising they are trying to hide it from stockholders, refusing to bring up the issue in any official manner or at stockholder meetings.  We wouldn't want to allow blood on the store floors to distract from gun profits, would we?  Little wonder, then, that a major stockholder had to sue Walmart for the right to bring up the gun issue at stockholder meetings.  If the deaths of shoppers and employees aren't enough to convince the Waltons to change their pro-gun policies, perhaps money will?

This is why Walmart's motto "Save money. Live better" isn't appropriate.  Instead, it should be.....